Posted at 17:54h in Travel by Alisa Weldon
0 Likes
Share

Our cabbie’s radio is producing lyrics of longing for the big city as the reality of our retreat from all the trappings of the city has just begun. We are in Split, the northernmost city on the Dalmatian Coast of the Adriatic Sea. From Austin, our journey took us through Dallas (of course) to Frankfurt and then on to Split…but just barely. As Croatia continues to shed its memories of civil war, there are still a few reminders that this country is still establishing its own identity, no longer wishing to be called simply “the former Yugoslavia.” Part of this growth is establishing nationalized services, such as Air Croatia. Part of the growing pains is that Air Croatia often cancels flights and goes on strikes: EWP—Emerging World Problems. 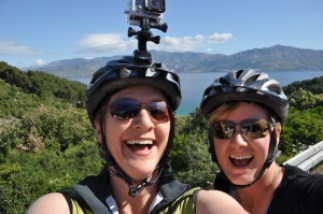 With this trip, Alisa and I are celebrating our Christmas presents to each other, along with both our birthdays. We actually departed the day before my birthday. What a great coincidence! But not only is this trip one of celebration, it is one of motivation, too. Although we will be boating and sailing from island to island in the sun-drenched Adriatic, we will also be cycling through the islands—and they aren’t exactly flat!

Some Austinites are expert enough cyclists to navigate a foreign countryside on their own, but that is not our forte. So we have booked a seven-day cycling tour through Backroads, a California tour outfitter with nearly five decades of experience taking all levels of travelers on active vacations all around the world.

The Dalmatian Coast is made up of a chain of islands dotting the Adriatic directly east of Italy. Hence, the food, architecture and wine are very similar to the Mediterranean life so popularized in movies such asUnder the Tuscan Sun. Yet, as a result of the region’s most recent civil war in the 1990s, the Dalmatian coast still seems to be caught in some beautiful time warp that constantly reminds type-A American travelers to slow down and take in the “simple.” 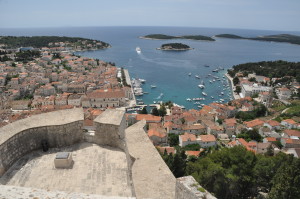 The first and largest island is Brać, which is covered in the most beautiful white marble limestone. It is the likely source of the materials used to build Diocletian’s Palace, which we toured in Split, and which is widely regarded as the world’s most complete example of a Roman palace built at the turn of the fourth century.

The next island, Hvar, is the only place where you realize that you are in the playground of the super wealthy. Yachts line the harbor, skillfully anchored next to some of the commercial boats used to haul in the local catch. We are reminded of this at dinner tonight and as we cycle through the islands. Here, there are no large grocery stores, but you do see an abundance of small markets. At each meal, our food, which was sourced from the area, included the grilled whole amberjack, which was easily our favorite meal of the week. Simple has been redefined with these meals.

Next, we sail down to Korčula, the often-declared and rarely verified birthplace of Marco Polo. The locals take great pride in this claim, with many buildings to explore and trinkets to purchase. Much of his life and travels were based on prison transcripts that he dictated to a cellmate. Whether his birthplace was Croatia or Venice, Polo’s travels inspired generations of explorers. The best part of the legend is the Marco Polo home and tower, which is open to explore. But the most commanding views are from Saint Mark’s bell tower, which rewards you with an encompassing vista of the island, especially beautiful after the harrowing and claustrophobic climb that places you on a thin metal grating with a seven-story drop to the base.

We completed our travels in the walled city of Dubrovnik, detailed in this blog post.

Be sure to login to Facebook to enable comments – and let us know what you think so we can connect!